Astoria Golf & Country Club proudly sponsors the  Oregon Coast Invitational Match Play Championship. This event, the second oldest golf tournament in Oregon behind the Oregon Amateur Championship, was inaugurated on August 6, 1910, and was played at the Gearhart Golf Course, the oldest golf layout in the State of Oregon.  Since that first competition in 1910 there have been changes in format, tournament name and various classes of player eligibility;  however the popularity of this annual golf tournament by the seashore has never diminished.   On the contrary, the annual event, held at Astoria GCC since 1951 (and from 1937-1941) attracts an even larger list of applicants who seek to be one of the now 352 entries who tee off during the last week of July.  Historically the tournament has sold out, often with a waiting list, and when invitations are mailed applications are returned immediately for fear of not registering in time.  As one out of town participant once remarked, "I get home from the office and here is my invitation to the Coast Tournament.  I sit down immediately and fill out the form.  Then I write a check, put both in an envelope, and high tail it to the post office, hoping it will go out with that day's mail."

The "Coast", as it is affectionately called, continually attracts several generations of competitive golfers and at least four former champions became regular members of the PGA Tour, with two of them, John Schlee and John Fought, winning tour events.  1988 OCI Women's Champion, Nancy (Kessler) McDaniel, is the founding coach of the UC Berkeley women's golf team where she has led the highly regarded program for 21 years.  Every year a diverse mix of amateur golfers, young and older, visit the Northern Oregon Coast during the last week of July to reconnect with old acquaintances in a competitive yet casual atmosphere hosted at a championship caliber golf course with a very supportive membership.  In addition to extraordinary golf, participants enjoy delicious food, organized banquets, a family beach party, live music and eight days of priceless memories.  The logistics involved with hosting such a large, complex, and successful event can be daunting, but thanks to a dedicated group of volunteers and club staff who invest significant time planning the event, the Oregon Coast Invitational has distinguished itself as one of the best amateur golf events in America.  It is certainly one of the most fun tournaments golfers will ever have the privilege of competing in. 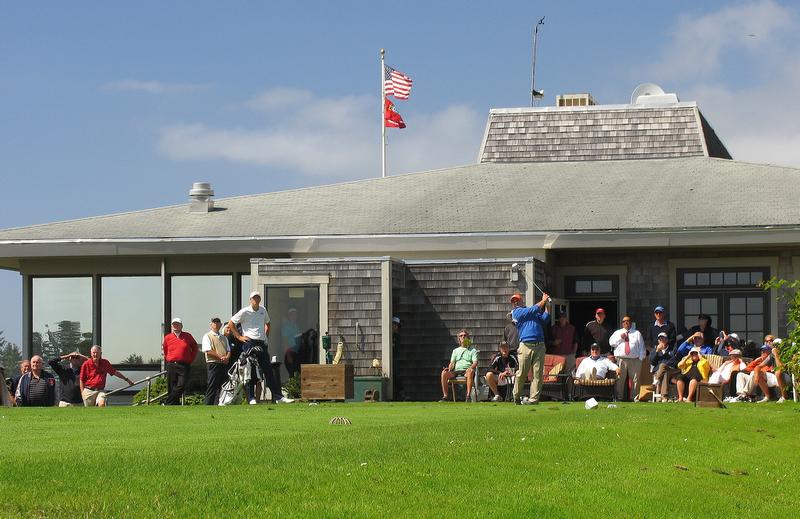 2013 OCI champion, Anthony Arvidson, hits his tee shot on the 10th tee (28th hole) during his 2016 final round match against Riley Elmes. The match went back and forth until Elmes birdied the 32nd and 33rd holes to prevail 2 & 1 and be crowned the Grand Champion of the 106th Annual Oregon Coast Invitational.